OUR FAVORITE HORIZONTAL ARTWORKS, WHICH WILL MAKE YOU LOOK AGAIN AND AGAIN. HELP SUPPORT THE GALLERY AND THE ARTISTS IT REPRESENTS DIRECTLY.

PLEASE EMAIL GALLERY@VONLINTEL.COM FOR SALES INQUIRIES. THE GALLERY IS NOW OPEN BY APPOINTMENT. 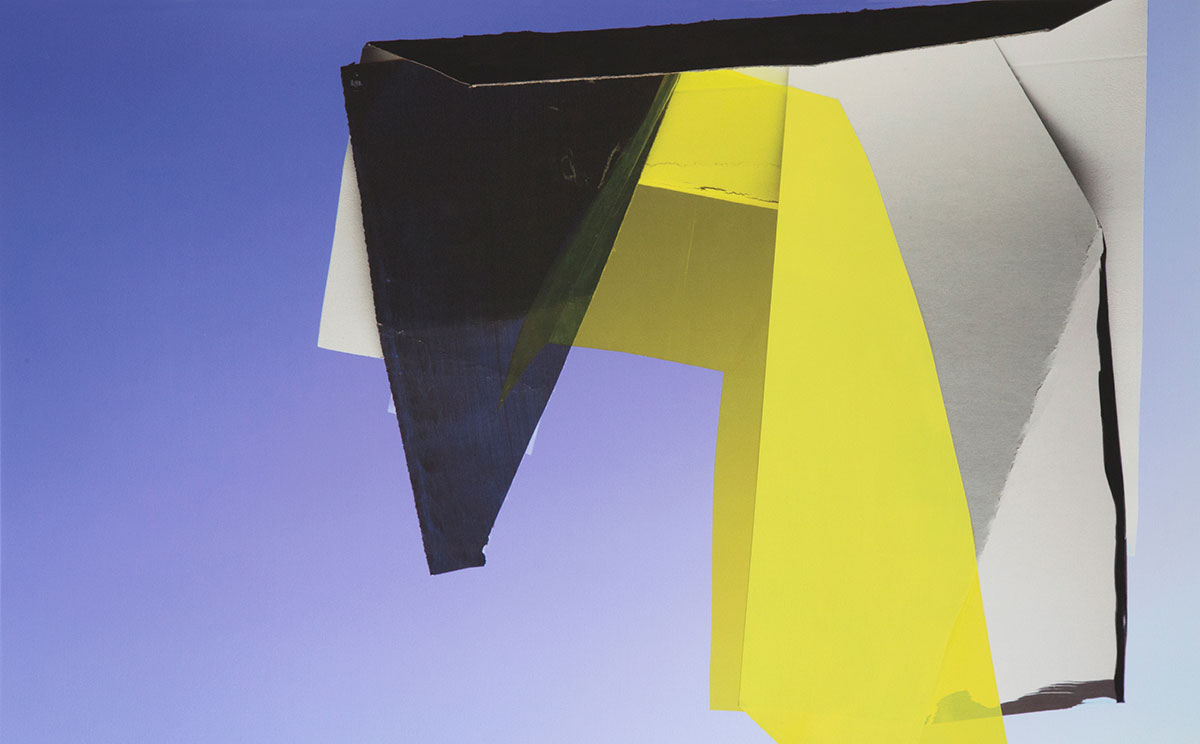 What intrigues me about Kate’s work is that it does not fit any traditional descriptions such as photography, painting or sculpture. She blends all of these media and the resulting work keeps me interested far beyond the first encounter.

Kate Petley’s image-making process is guided by a will to transform. Assemblages of cardboard, tape and other castaway materials are carefully placed into intensely lit arrangements and photographed. Images of recognizable patterns of corrugation and pitted surfaces undergo a startling shift when the photograph is transferred to larger canvases. Translucent and opaque forms, often architectural in nature or resembling geological outcroppings, float in front of or fold into horizonless fields of gradated reds, greens, indigos and violets. The overall flatness of the printed images contravenes their holographic appearance. To enhance their mystical opacity, Petley introduces hard-to-detect brushwork that draws attention to certain areas while concealing the image underneath. These brushed overlays of acrylic paint generate cognitive dissonance as the mind toggles between digital and material realms.

Petley harnesses physiological responses to color and light, inviting feelings of joy, quietude and wonder. These works on canvas belong to a long lineage of painters concerned with the luminous surface as a space for absorption, a space increasingly usurped by the ever-present backlit screen.

At Von Lintel, Michael Waugh makes large-scale ink drawings of pastoral scenes with woods and horses and dogs, in a rough yet finessed black-and-white mark-making style reminiscent of 19th-century etchings. These scenes are impressively nuanced and detailed landscapes — but those are not just pen strokes. Lean in close and you soon realize every single ink mark is, in fact, writing. And not just any writing.

Waugh meticulously transcribes bureaucratic documents and philosophical texts, such as might be issued by academic or governmental institutions, the Federal Economic Impact Report, or studies on election tampering. These dense, chewy texts would be challenging enough to read through on a page, much less subjected to Waugh’s expressive, nuanced, calligraphic onslaught. But you can make out just enough to both marvel at his patience and skill and taste the irony of the content compared with the gentility of the pictures he creates using this eccentric content. 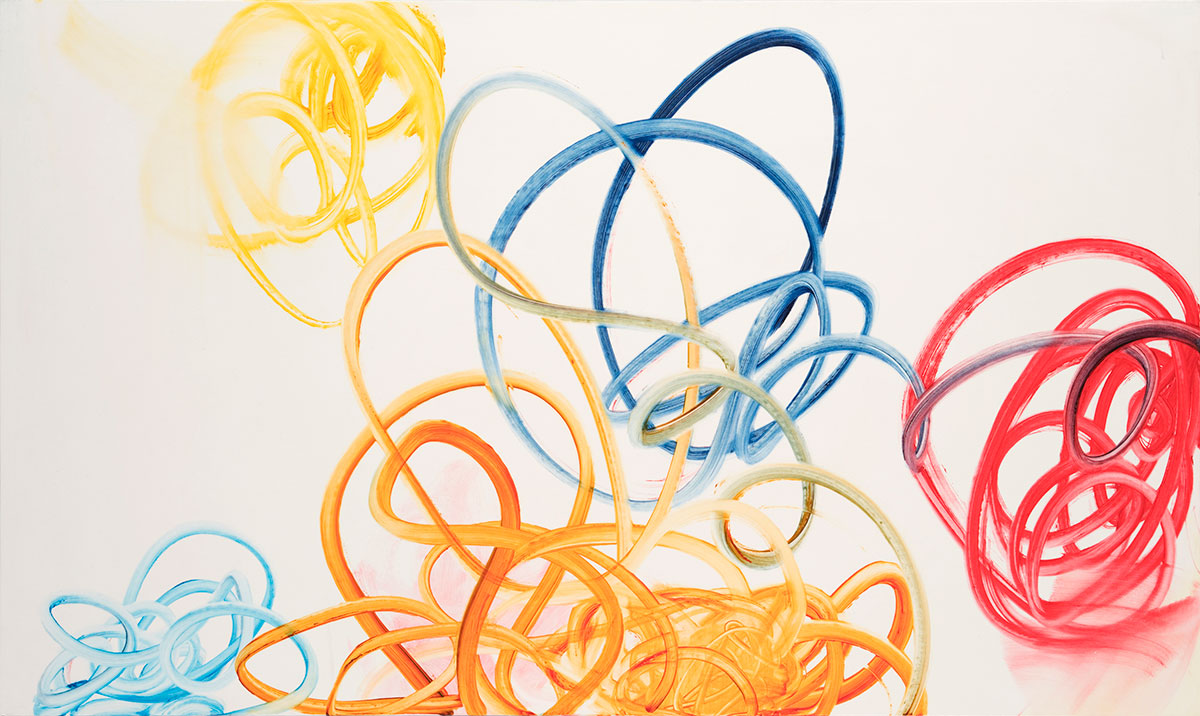 In 1987 Mark Sheinkman had confined himself to the use of paper, graphite and erasers, forcing himself to squeeze new life out of these conventional tools. Mark once told me that by reducing his options, he was able to get more variety!

His consistent investigation of the figure ground relationship, while limiting his materials has become a trademark of his and a delight to witness. However , over the last two decades I have watched his work go from works on paper of relatively simple compositions based largely on repetitions of a single line or shape to paintings reminiscent of translucent ribbons of light and whisps of smoke, made almost entirely through a subtractive process. More recently he moved from a series of black and white canvases with frenetic mark making to this newest body of work which I would describe as canvases marked by the exhuberant freedom and their graceful painterly lines of color.

On the surface his most recent foray into color looks like a giant shift for Mark, but it is really a culmination of his ambition to synthesize sculptural and architectural features with abstraction using the visual language that he has been perfecting all along. 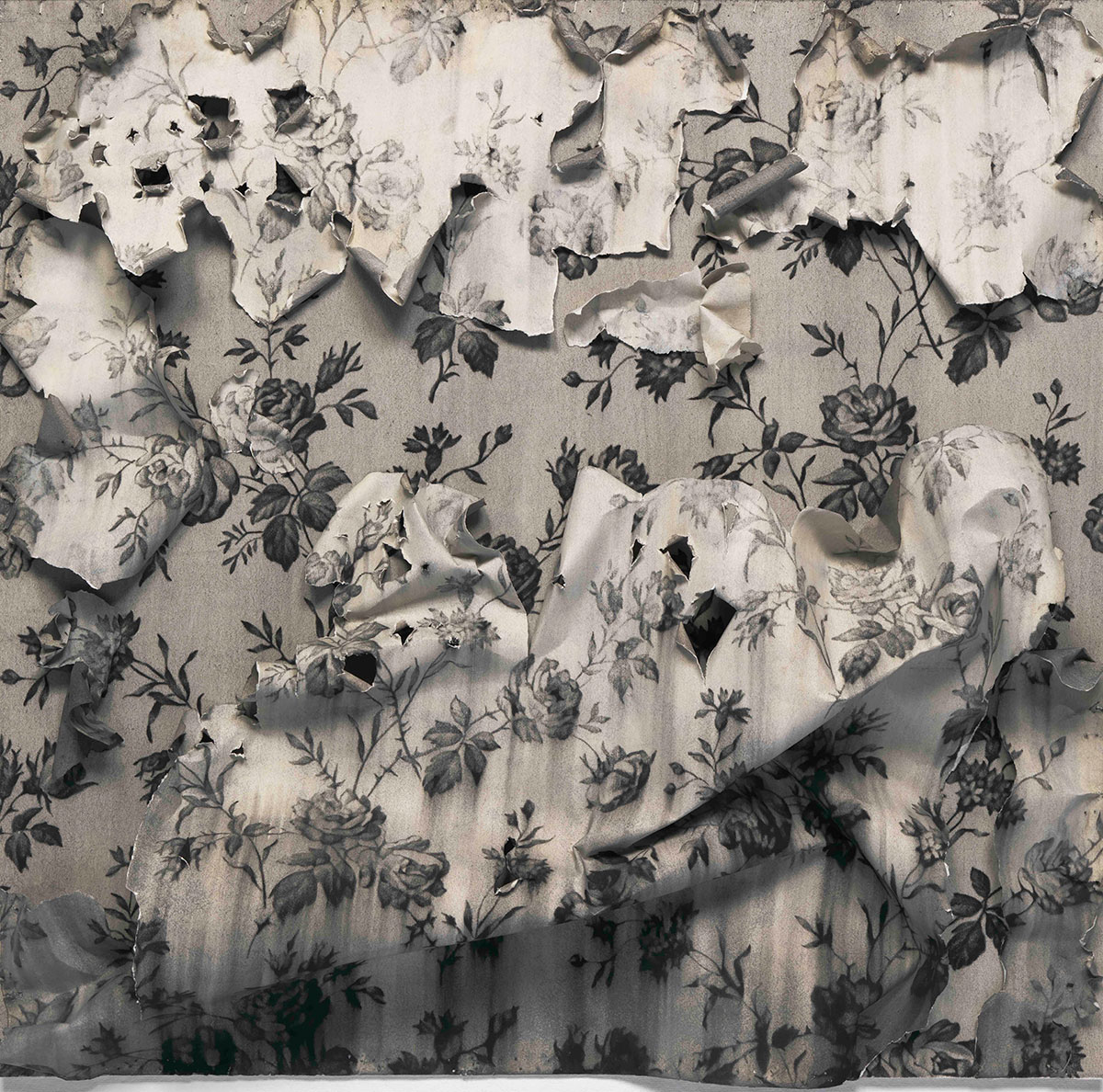 In several gorgeous, haunting pieces, he layers drawings of floral wallpaper one atop another, the outermost layer cracking, curling and peeling away like sloughed skin. The renderings, in conté crayon on heavy rag paper, are lavish feasts for the eye, all velvety, ashy blacks and foggy, smoky grays, lush sensuality from edge to edge. 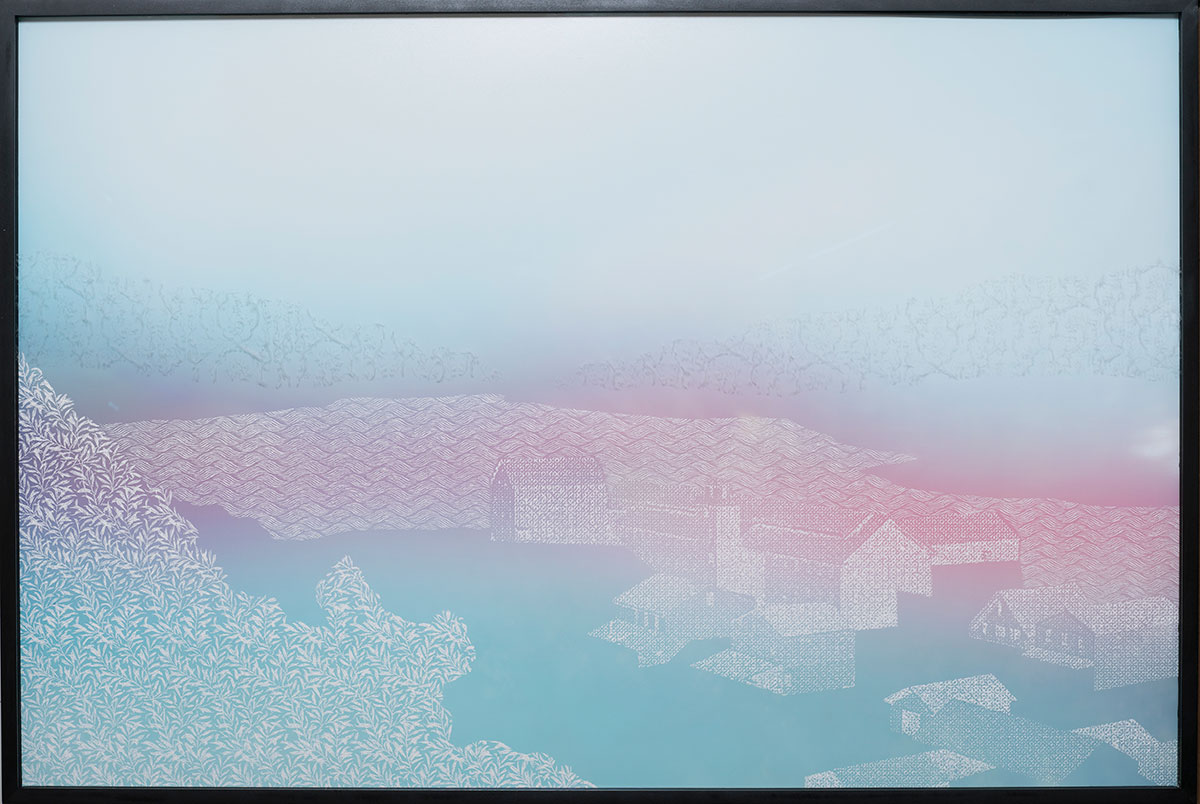 The following is a statement by Christopher Russell

By this I mean that technology has moved beyond its earliest foundations; it asks a different set of questions than traditionally associated with the medium. The history of chemical photography is largely about a faithful recording of shapes and tones. It is a medium that made the private public, captured the beauty of ephemeral objects and transient juxtapositions. Chemical photography captured the aesthetics of human emotion and voyeuristic fragments for us to puzzle into an understanding about other people and places. And it did so with such detail that, culturally, we mistook our impressions of the image for a grander sort of truth.

With the prominence of digital image making, the foundation of photography has shifted. Digital imaging is built for complete image malleability, the ability to easily present collage with the fidelity of traditional photography. One can, in a few seconds, customize the color of a single pixel—something that would have been impossible with chemical processes. As most people now have photo editing tools on their phones, there is no longer a belief that the captured image is anything more than a record of personalized fictions.

Given this realization, I stopped trying to make pictures of things. I intentionally manipulate the light as it enters the lens of my camera, creating fuzzy, atmospheric images that subvert the indexical quality of the photograph. I then scratch into the surface of my prints, crossing photography’s biggest taboo, marring the print surface and piercing the medium’s illusionistic veil. This way of working asserts the inherent Romanticism of digital production and uses the captured image as a starting point for more complicated thoughts that come from observing the world around me. 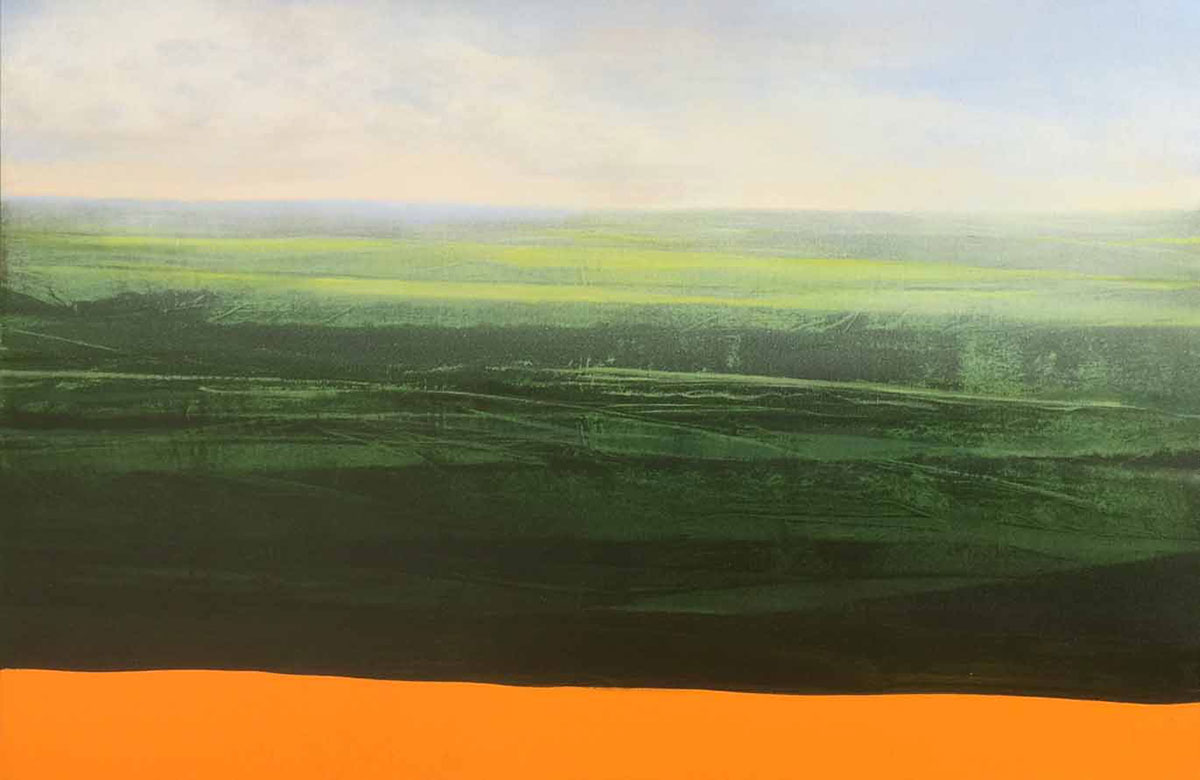 Murado is a technical virtuoso who returns to familiar motifs to continue experimenting with the capacity of paint to express the realities of nature. Whereas many artists lament the mind’s habitual reflex to interpret a horizontal piece as a landscape, Murado embraces it. His work hinges upon illusion as he conjures forms without actually rendering them. From a distance, latitudinal swipes of rusted orange or chartreuse green anchor apparent twinkling cityscapes or mountain ranges. But in actuality, the works are deft striations of pigment impressed with textural patterns. 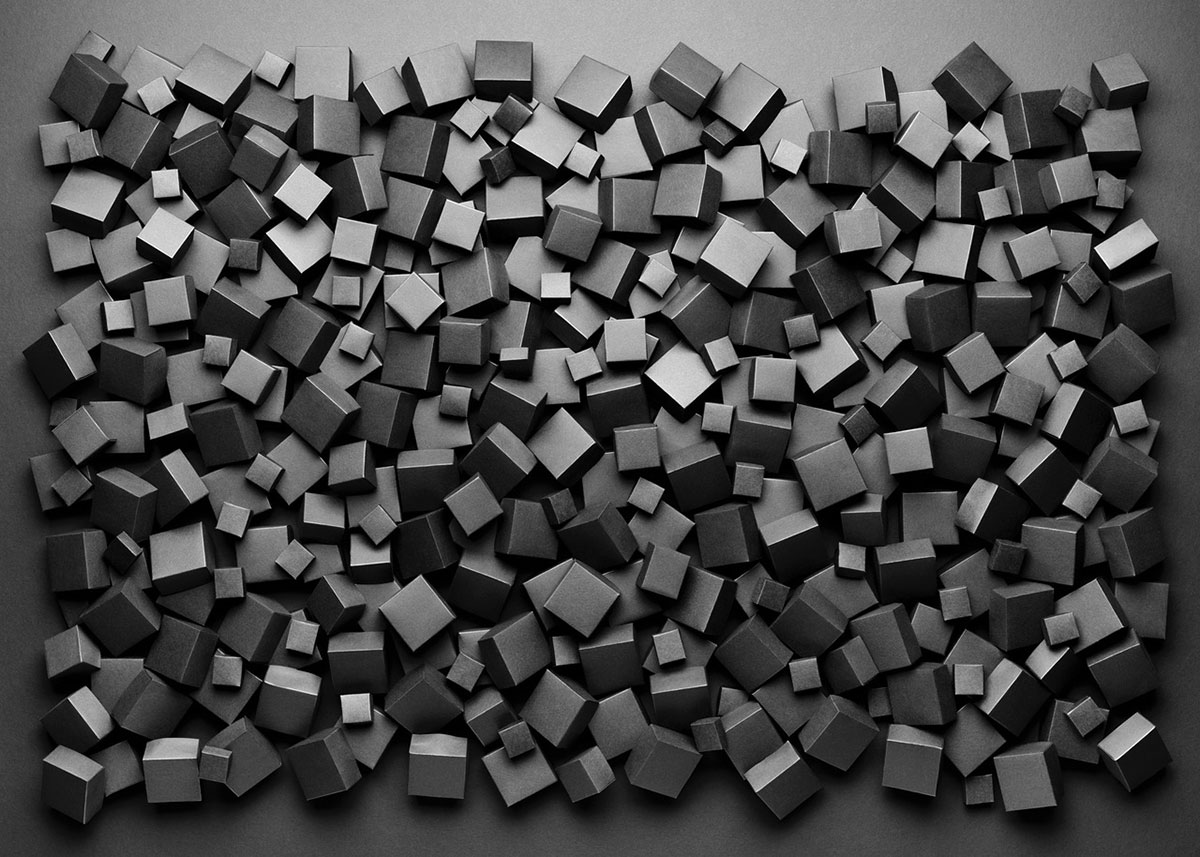 Cutting into or physically manipulating photographs has become quite a trend in the art world, but artists do so with varying success. In “Photoobjects,” German photographer Christiane Feser has not only done something delightfully original, she has done so with astonishing élan. She creates geometric abstractions that tease the eye, that make you want to look longer and more deeply to understand what you are seeing. When you stand in front of “Partition 31,” you wonder if you are actually looking at a sea of open boxes mounted on the wall, with their openings pointed towards you — or are you looking at a photograph of a sea of boxes? In fact, Feser’s photographs are hybrids; they are both photography and sculpture. 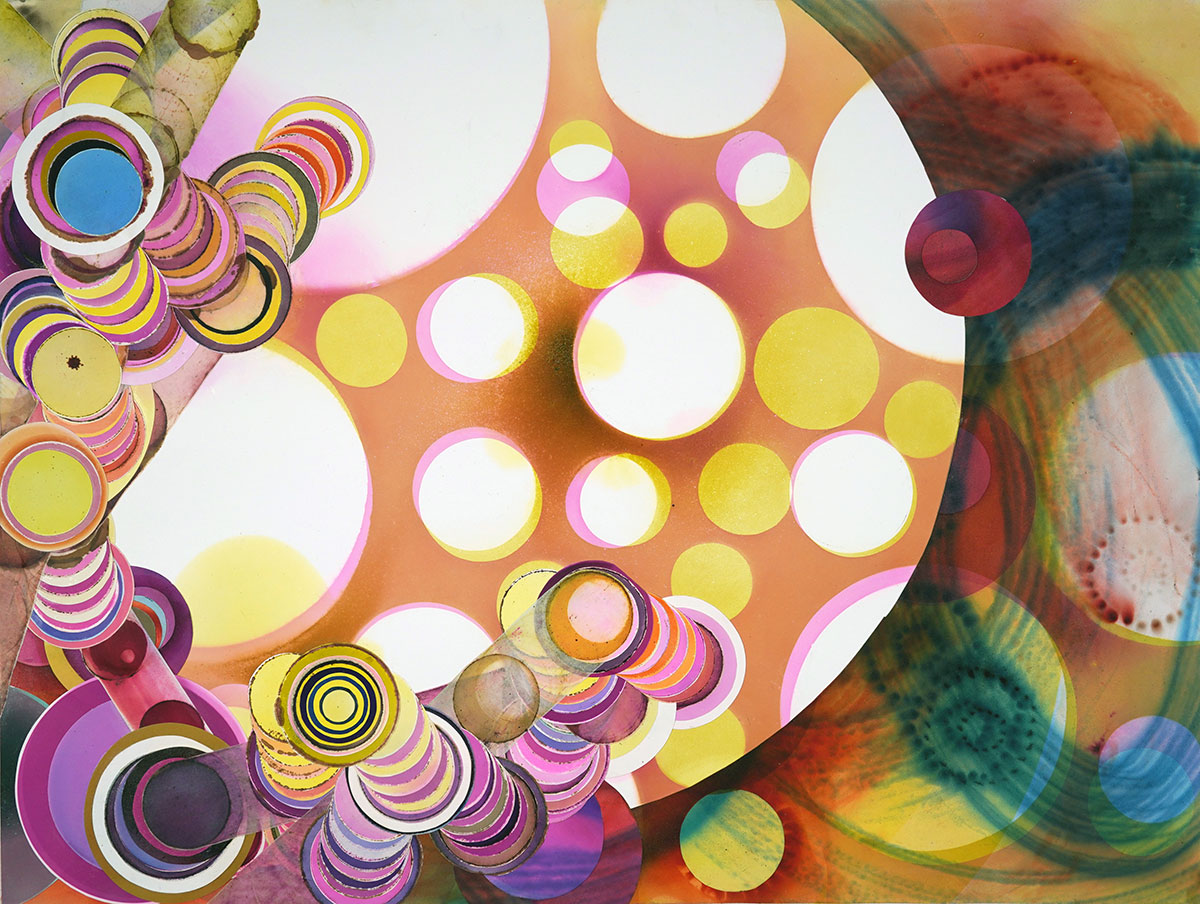 “With a unique twist on the notion of mark making, Fiore follows a long-standing tradition of challenging ideas of gestural abstraction - think Frankenthaler’s stains, Stella’s lines, and Twombly’s scrawling graffiti. But to further complicate the argument, the Bronx-based artist uses the mechanical to create stains, lines and scribbled marks combined with the more-meticulous techniques of collage in order to maker own statement.” 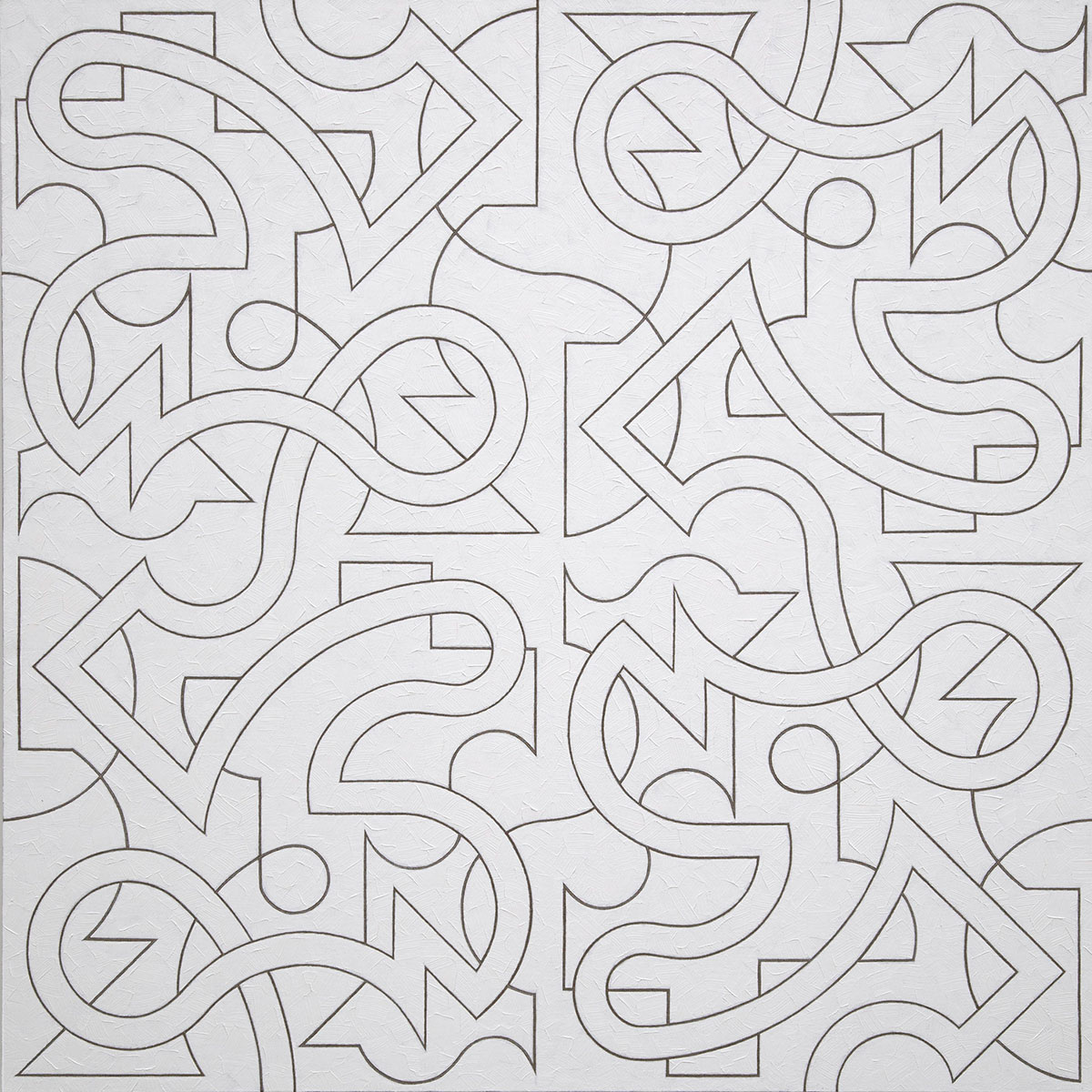 Valerie Jaudon’s captivating maze-like paintings are meditations on line, rhythm, duration and structure. Sharp turns, rounded corners and long-running straightaways bypass and interlace across raw canvas or impastoed monochrome fields. The articulated forms wind into modules, first drafted as large drawings on paper and then pencil transferred onto either canvas or linen. The modules reverse, replicate and transpose until the entire surface is covered and a path is carved and paved with lush brushstrokes of paint.

“Complex in plan, elegant in realization, these paintings relate as clearly to the work of canonical artists like Jasper Johns and Frank Stella as they do to Islamic screens and grilles. Once subversive, they now seem surprisingly classic.”

Wednesday - Saturday
from 12am until 6pm

The gallery is temporarily
closed due to Coronavirus.

The gallery is now open by appointment.